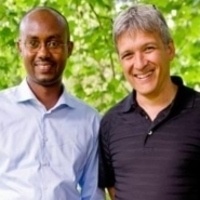 Carl Wilkens: "Why I Stayed in Rwanda"

“So what would you do if, like Carl Wilkens, you were caught in the middle of a genocide?,” asked Nicholas Kristof in a New York Times profile of Wilkens.  “U.S. officials and church leaders ordered Mr. Wilkens to join an emergency evacuation of foreigners from Rwanda, and relatives and friends implored him to go. He refused.”

Carl Wilkens was the only American who chose to stay in Kigali, Rwanda throughout the 1994 genocide. Venturing out each day into streets crackling with mortars and gunfire, he worked his way through roadblocks of agitated soldiers along with paramilitary units (Interahamwe) armed with machetes and assault rifles in order to bring food, water, and medicine to groups of orphans trapped around the city.

For over a decade, Carl Wilkens has been sharing stories around the globe to inspire and equip people to “enter the world of The Other.” Each year he returns to Rwanda with students and educators to see for themselves how people are working together to rebuild their country and rebuild trust.