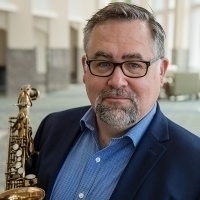 Steve Snyder has performed in France, Portugal, Brazil, Sweden, Taiwan, throughout the U.S. and Canada. He has played with artists such as Randy Brecker, Jerry Bergonzi, Victor Goines, Landau Eugene Murphy Jr., Dick Sisto, Eric Alexander, Brad Goode, Robben Ford, Chris Maresh, and many others. The Austin Chronicle has called his work “superb.”

Snyder and Campbell played together in the University of North Texas One O'Clock Lab Band in 1993-1994. They are both currently members of the Michael Waldrop Big Band.