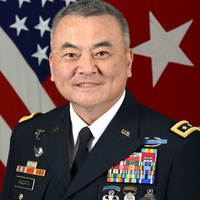 Lieutenant General Michael K. Nagata, a native of Virginia, graduated from Georgia State University and was commissioned as an Infantry Officer in 1982. He initially served as a Platoon Leader in the 2nd Infantry Division before volunteering for the Army Special Forces in 1984.  In 1990, he volunteered for a Special Missions Unit (SMU), in which he served at various times throughout his career as a Troop Commander, Operations Officer, Squadron Commander, and SMU Commander.

He has deployed extensively throughout his career, participating in contingency and combat operations in such varied locales as Somalia, the Balkans, Iraq, Pakistan, Syria, and elsewhere. On May 13, 2016, he assumed the position of Director, Directorate of Strategic Operational Planning at the National Counter-Terrorism Center.

Lietenant General Michael K. Nagata will present as part of the annual International Speaker Lecture Series on the topic "Is America Winning?"

For more information on the series, including online registration, please visit the International Speaker Series webpage and or contact the Office of Global Education and Engagement at globaleducation@uncc.edu or 704-687-7755.